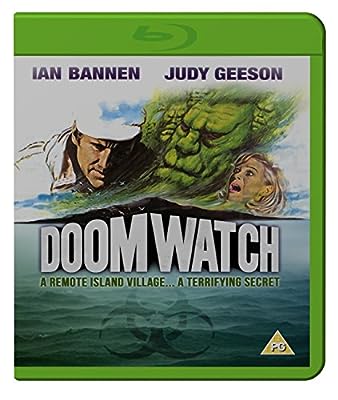 Price: £8.99
As of 2019-08-28 11:02:18 UTC (more info)
Product prices and availability are accurate as of 2019-08-28 11:02:18 UTC and are subject to change. Any price and availability information displayed on http://www.amazon.co.uk/ at the time of purchase will apply to the purchase of this product.
Availability: Not Available - stock arriving soon
Product Information (more info)
0 0
CERTAIN CONTENT THAT APPEARS ON THIS SITE COMES FROM AMAZON SERVICES LLC. THIS CONTENT IS PROVIDED 'AS IS' AND IS SUBJECT TO CHANGE OR REMOVAL AT ANY TIME.

The acclaimed feature film of the BBC TV series in which Dr Del Shaw (Ian Bannen) of Doomwatch - the British government's environmental monitoring organisation - travels to the island of Balfe to investigate pollution.

A year earlier an oil tanker was holed and its cargo contaminated the local waters - but has there been any adverse long-term effects? The villagers are all suspicious of Shaw, especially the menfolk, who seem to have transformed into near-neanderthals.

Samples of the local fish sent back to Doomwatch prove to be unnaturally large, and after teaming up with a local teacher (Judy Geeson) Shaw discovers that the transformation of the men is due to a rare disease called acromelagy. Co-stars Percy Herbert and George Sanders.

Prisoners of the Lost Universe (Dual For...