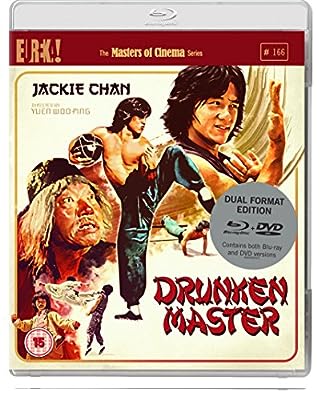 Price: £12.99
As of 2019-08-28 11:05:58 UTC (more info)
Product prices and availability are accurate as of 2019-08-28 11:05:58 UTC and are subject to change. Any price and availability information displayed on http://www.amazon.co.uk/ at the time of purchase will apply to the purchase of this product.
Availability: Not Available - stock arriving soon
Product Information (more info)
0 0
CERTAIN CONTENT THAT APPEARS ON THIS SITE COMES FROM AMAZON SERVICES LLC. THIS CONTENT IS PROVIDED 'AS IS' AND IS SUBJECT TO CHANGE OR REMOVAL AT ANY TIME.

Drunken Master is a film that, following Snake in the Eagle's Shadow (1978) (made with the same ensemble cast and director Yuen Woo Ping), consolidated Jackie Chan's position as the new Hong Kong kung fu action star of the late 1970s. Set in the late 19th century, Chan plays the great Chinese hero Wong Fei Hung as a loveable young rogue who is always getting into fights or embarrassing his family. Eventually his father decides the only way to make a man of Chan is to send him for training with an old drunken drifter played by Yuen Siu Tien. Just as they did in Snake in the Eagle's Shadow, the pair make a fine double-act, though this time there is much surreal entertainment to be had from the older man teaching the younger the fine art of drunken kung fu. Learning to fight like the Eight Drunken Gods before the final confrontation with Hwang Jang Lee causes Chan considerable problems, though Yuen Siu Tien simply fights better the more he drinks. Yuen Siu Tien would reprise the role in his final film, Magnificent Butcher (1979) yet with Chan he finds a perfect blend of slapstick comedy and creatively staged action which makes Drunken Master a genuine kung fu classic.

On the DVD: The picture is generally strong though inevitably there is a fair amount of grain. Unfortunately the original 2.35-1 film has been reformatted to 1.77-1 widescreen TV ratio. This has been done more skilfully than usual but is still a misrepresentation of the original cinema release and does mar both the landscape photography and the fast moving action scenes. The sound is perfectly acceptable mono. Soundtrack options are the original Mandarin with English subtitles, or an English dub. Extras include the original English language theatrical trailer, Hong Kong Legends' own trailer, plus promos for further releases and a photo gallery. There is a detailed text biography and filmography of Jackie Chan, a biography of Yuen Woo Ping and a text interview with producer Ng See Yuen. Also included is a text biography of Hwang Jang Lee linked to a kicking showcase which is another short fight scene. Most of these features are identical to those on the Snake in the Eagle's Shadow DVD. --Gary S Dalkin