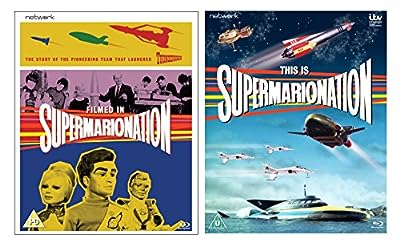 Price: £6.99
As of 2019-06-03 02:33:04 UTC (more info)
Product prices and availability are accurate as of 2019-06-03 02:33:04 UTC and are subject to change. Any price and availability information displayed on http://www.amazon.co.uk/ at the time of purchase will apply to the purchase of this product.
Availability: Not Available - stock arriving soon
Product Information (more info)
0 0
CERTAIN CONTENT THAT APPEARS ON THIS SITE COMES FROM AMAZON SERVICES LLC. THIS CONTENT IS PROVIDED 'AS IS' AND IS SUBJECT TO CHANGE OR REMOVAL AT ANY TIME.

United Kingdom released, Blu-Ray/Region A/B/C DVD: LANGUAGES: English ( Dolby Digital Stereo ), English ( Mono ), WIDESCREEN (1.78:1), SPECIAL FEATURES: 2-DVD Set, Deleted Scenes, Interactive Menu, Scene Access, SYNOPSIS: ***WARNING***FILMED IN SUPERMARIONATION is Zone A/B/C and THIS IS SUPERMARIONATION is Zone B*** FILMED IN SUPERMARIONATION (2014) This is the definitive documentary telling the story of the unique puppetry and animation technique developed by Gerry and Sylvia and their team and deployed in all their programmes throughout the 1960s including Stingray, Captain Scarlet and, most famously, Thunderbirds. Directed and co-produced by Stephen La Riviere and hosted by Lady Penelope and Parker themselves, Filmed in Supermarionation is a screen adaptation of his book of the same name and features a wealth of previously unseen archive footage, brand new interviews with the surviving casts and crews and clips from the shows themselves. A highlight of the film are ingenious and accurate recreations of the pioneering techniques used in the productions. THIS IS SUPERMARIONATION You ve seen how the shows were created now see them as never before Supermarionation in High Definition. Launch the disc, sit back and enjoy some rare treats on a journey through Supermarionationland. Parker, Lady Penelope and Brains are your hosts, introducing some of the very best episodes from the Supermarionation archive as well as news items, commercial breaks with tie-in adverts and much more. ...Filmed in Supermarionation / This is Supermarionation - 2-Disc Set (Blu-Ray)