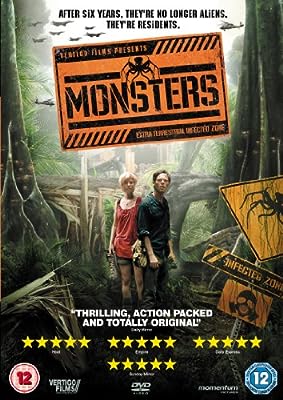 Price: £1.98
As of 2019-05-15 06:51:45 UTC (more info)
Product prices and availability are accurate as of 2019-05-15 06:51:45 UTC and are subject to change. Any price and availability information displayed on http://www.amazon.co.uk/ at the time of purchase will apply to the purchase of this product.
Availability: Not Available - stock arriving soon
Product Information (more info)
0 0
CERTAIN CONTENT THAT APPEARS ON THIS SITE COMES FROM AMAZON SERVICES LLC. THIS CONTENT IS PROVIDED 'AS IS' AND IS SUBJECT TO CHANGE OR REMOVAL AT ANY TIME.

The aliens have landed, but not to worry: they've been quarantined in northern Mexico, and the US government has put up a great wall along the border to keep the unwanted visitors out. This infected zone is the setting for Monsters, a sci-fi parable with a low budget and some high ambitions. As even a one-sentence summary suggests, director Gareth Edwards is working a metaphor that pokes at contemporary fears about immigrants and "the other" encroaching from over the border. Except these aliens aren't illegal, they're extraterrestrial. Taking us into the Zona Infectada are two ill-matched travelers: Kaulder (Scoot McNairy, from In Search of a Midnight Kiss) is a journalist moving through Mexico in search of photographs of the large, tentacled creatures, while Sam (Whitney Able) just happens to be the daughter of his employer. Because the boss needs his daughter safely escorted back to El Norte, an irritated Kaulder is stuck with the job. This creates a modest amount of friction between the two voyagers, but mostly they're trekking through the zone and dodging dangerous situations. The social metaphor gets thicker as the movie goes on, particularly when we get to the question of whom the border wall is harming more, the outsiders or the builders. But the movie has other problems as well. Neither main character is colourfully drawn, and the usual disaster-movie issue of credible-behaviour-in-a-crisis doesn't always feel right. A climactic sequence involving the aliens at night is rightly spooky, even if you're aware the film is doing a bit of reaching at that point. The creatures are all the more impressive given their homemade quality (Edwards is a visual-effects veteran who did his computer effects in a very streamlined way), and indeed they are more impressive than their human counterparts. --Robert Horton

The Man from the Future [DVD]

The Call Up [DVD]