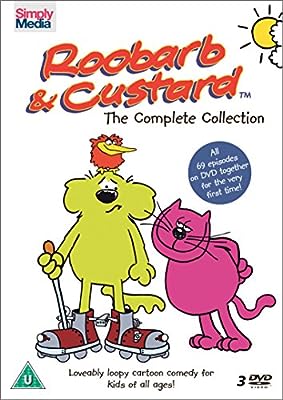 Price: £11.63
As of 2019-05-13 06:12:52 UTC (more info)
Product prices and availability are accurate as of 2019-05-13 06:12:52 UTC and are subject to change. Any price and availability information displayed on http://www.amazon.co.uk/ at the time of purchase will apply to the purchase of this product.
Availability: Not Available - stock arriving soon
Product Information (more info)
0 0
CERTAIN CONTENT THAT APPEARS ON THIS SITE COMES FROM AMAZON SERVICES LLC. THIS CONTENT IS PROVIDED 'AS IS' AND IS SUBJECT TO CHANGE OR REMOVAL AT ANY TIME.

Directed by Bob Godfrey, who was also jointly responsible for its jelly-wobbly animation, written by Grange Calveley and narrated by the tirelessly chipper Richard Briers, Roobarb and Custard was one of the very great five-minute animated cartoon series of the 1970s. This complete edition contains all its 30 episodes. First broadcast in 1974, squeezed in just before the early evening news on the BBC, it was ostensibly aimed at schoolchildren. However, there's much for adults to enjoy in these episodes beyond the obvious nostalgia value.

Roobarb is the breathlessly optimistic hound determined to reshape the universe according to his existential whims but who, like many dogs, is perpetually apt to bark up the wrong tree. Daily he tries to liven up the garden he inhabits, be it putting on a clown show on a rainy day or reinventing the day Thursday as Thorsday, thereby invoking the anger of the Norse Gods. All his efforts end in catastrophe, provoking the guffaws of the smug and cynical cat Custard and twittery snickers of the Greek chorus of birds in the trees. Deep truths about hubris and folly are revealed in these episodes.

The makers of these cartoons, who clearly had a very good time working on them, see no reason not to avail themselves of all the surreal possibilities of animation, or to indulge in groan-inducing puns for that matter. From the cheesy soundtrack to the lateral flights of associative fancy, this is wonderful, timeless stuff that should give paws for thought for those who pooh-pooh 1970s cartoon canine capers.

On the DVD: The Complete Roobarb and Custard has one extra feature--an interactive game in which you are invited to foil Custard by clicking a button to effect a Roobarb disguise. Adults may struggle to comprehend the rules, but they should present no problem to the more computer-adept under-10s. --David Stubbs