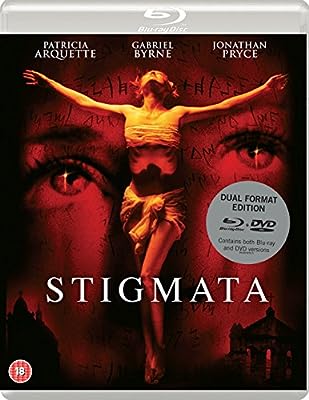 Price: £7.99
As of 2019-07-30 17:27:38 UTC (more info)
Product prices and availability are accurate as of 2019-07-30 17:27:38 UTC and are subject to change. Any price and availability information displayed on http://www.amazon.co.uk/ at the time of purchase will apply to the purchase of this product.
Availability: Not Available - stock arriving soon
Product Information (more info)
0 0
CERTAIN CONTENT THAT APPEARS ON THIS SITE COMES FROM AMAZON SERVICES LLC. THIS CONTENT IS PROVIDED 'AS IS' AND IS SUBJECT TO CHANGE OR REMOVAL AT ANY TIME.

Gabriel Byrne plays Father Kiernan, a young Jesuit priest whose degree in chemistry makes him a sort of priest/detective as he investigates weeping Marys and the like around the world. Meanwhile, Frankie (Patricia Arquette), a rave-generation Pittsburgher, is afflicted with the stigmata--holes that appear in her wrists, resembling the wounds of Christ. The young woman's symptoms filter back to the Vatican and Father Kiernan is assigned to the case. The priest is puzzled by Frankie's atheism; usually the stigmata only appear on the devout (hence the age-old controversy of miracles vs. hysteria). Other manifestations appear on Frankie, and the priest's cardinal (Jonathan Pryce) is brought in, leading to political manoeuvring within the Church hierarchy. The film owes a large and obvious debt to The Exorcist (at one point, Frankie's bed scoots across the room and she levitates into a crucifix position) but to term it an Exorcist rip-off would be to short-change Stigmata. The premise and screenplay are more cerebral than in the l973 film, and the source of the phenomenon is coming from a completely different place.

Unfortunately, amid Stigmata's high-octane editing and slick technique, the chills of The Exorcist aren't there, giving the movie a sort of identity crisis: horror movie or intellectual thriller? Several elements of the film challenge basic tenets of the Catholic faith, hence the brief furore that erupted at the time of the film's release; if nothing else, the internal workings of the Church are shown in a very unflattering light indeed. Byrne excels as the sceptical priest, as does Arquette as the tortured young woman. All told, Stigmata is a rather uneven effort but one with a thought-provoking combination of theology and thrills served up in a thoroughly modern, stylish package. Fans of TV's Ally McBeal will recognise Portia De Rossi in a supporting role. --Jerry Renshaw