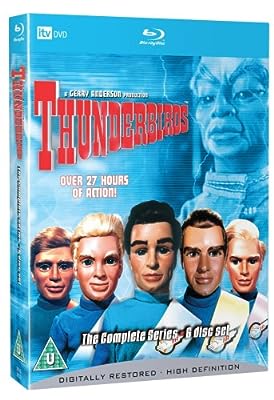 Price: £25.24
As of 2019-03-27 22:04:28 UTC (more info)
Product prices and availability are accurate as of 2019-03-27 22:04:28 UTC and are subject to change. Any price and availability information displayed on http://www.amazon.co.uk/ at the time of purchase will apply to the purchase of this product.
Availability: Not Available - stock arriving soon
Product Information (more info)
0 0
CERTAIN CONTENT THAT APPEARS ON THIS SITE COMES FROM AMAZON SERVICES LLC. THIS CONTENT IS PROVIDED 'AS IS' AND IS SUBJECT TO CHANGE OR REMOVAL AT ANY TIME.

United Kingdom released, Blu-Ray/Region A/B/C DVD: LANGUAGES: English ( Dolby Digital 2.0 ), English ( Dolby Digital 5.1 ), English ( Subtitles ), WIDESCREEN (1.78:1), SPECIAL FEATURES: Box Set, Documentary, Featurette, Interactive Menu, Multi-DVD Set, Remastered, Scene Access, SYNOPSIS: When evil threatens, International Rescue blasts-off to sort things out. Somewhere in the Pacific the rescue organisation is always on the lookout for trouble. The founder and co-ordinator of the group is astronaut Jeff Tracy, whose sons serve as pilots of the group's five super-secret craft - the Thunderbirds. As the Tracys work for the good of mankind they must try to stop the villainy of The Hood who is determined to undermine the organisation and learn the secrets of the Thunderbirds aircraft. Thunderbirds delivers high-flying action and adventure through the imaginative use of Gerry Anderson's Supermarionation and the special effects of Academy Award® winner Derek Meddings. ...Thunderbirds - Complete Series - 6-Disc Box Set ( Thunder birds (32 Episodes) ) (Blu-Ray)